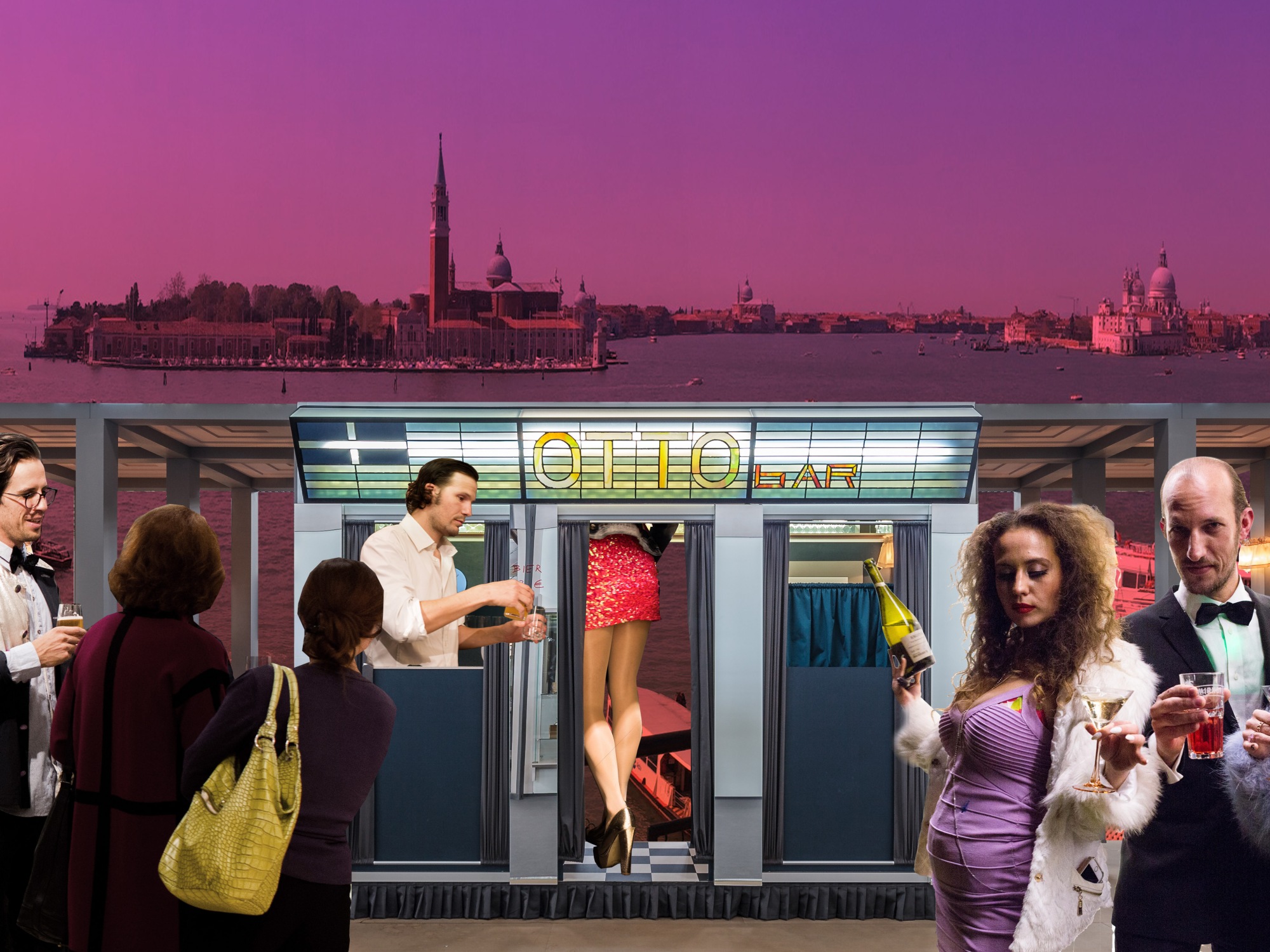 Super +, a group of artists from Munich, set up the OTTOBar on the secret terrace of the Hotel Gabrielli in Venice to refresh the thirsty art lover who has exhausted all corners of the Biennale and invites also artists, curators and journalists over a tap-cool Bavarian bier.

Alexander Deubl, sculpture and media artist, Christian Muscheid, painter, and Konstantin Landuris, designer and interior architect, create together interdisciplinary art works. Already known for the spectacular installation “The Flight of Phoenix” at the Parisian Nuit Blanche 2016, super + is a master in expressing simplicity in complex projects.

Working with a limited hotel area and bar dimensions of only 3,60 m x 1,20m  x 3m, they transmogrify in cooperation with the UNS architecture office the prestige of  Adolf Loos’ Bar aka the American Bar in Vienna.

Special mirror effects will engulf the visitor of the OTTOBar making him experience synchronic intimacy and infinite space while the sun is setting over the Venetian lagoon.

Terrace of the Hotel Gabrielli

Roxana Florina Popa:  What is the extra twist that the OTTOBar adds  to the atmosphere of the Venetian Biennale?

super + : The location of the bar is very unconventional, hidden and exclusive. Normally, only hotel guests hang out here. The Hotel Gabrielli / Sandwirth has its own intimate atmosphere in which we as visitors are allowed to interact.

We also like to involve Venetian locals and  figure out spontaneously what is possible in this environment.

After an exhausting day of visiting the Biennale exhibitions at the Giardini and Arsenale, we want to give visitors the opportunity to relax over a smooth sundowner, that is the fresh Bavarian beer from the tap, while enjoying the amazing view from the beautiful terrace of the Hotel Gabrielli / Sandwirth.

On the hotel terrace, we will have every day live broadcasts from the Kärntner Bar from Vienna , the Golden Bar and the Maroto Bar in Munich.

And last but not least, OTTO means 8 in Italian and the number 8 can be read as the infinity sign and that leads again and again to our infinity mirror effect. Crazy isn’t it?

RFP: Which emotions would you like your visitors to feel when surrounded by the illusion mirror?

super + : The bar is small, but when you sit inside, it feels like the bar is placed in a hall with endless columns.

The infinity mirror effect in the body of the bar is very subtle.

The way the columns are placed and the choice of their dimensions are planned very precise.

It looks simpler than it is, however, it took us a couple of renderings to find out the right dimensions.

RFP: Are you proposing a new bar concept?

super + : The OTTOBar is a moveable bar, the kind  that travels from space to space.

On the range of drinks we offer, our bar concept has to be more than simple because of  the reduced space we have to use. So, we serve one specific cocktail and fresh beer from the tap.

For running the bar, we invite bartenders from other bars we like to go to or we are really fans of and ask them to run our bar together with us. They choose then their favorite drink  or create a new drink.

We think people, especially creatives, often flirt with the idea of running their own bar.

But running a bar or a club is a very hard job.

Thanks to the OTTOBar we are able to play with the idea of being a bartender. Essentially, what makes it so interesting for us above all is the social aspect.

RFP: What nourished your fantasy in creating the installation?

super + : Originally, we have always been fans of the Adolf Loos Bar in Vienna.

We really liked how playful, simple looking architecture can be. Built in 1908, the Kärntner bar seems to be timeless.

After several trips to Vienna, we had the opportunity to use a store window in Munich to make an installation. We made a trashy copy of the Loos Bar or Kärntner Bar which was, especially in a social way, very interesting.

2 years later, we got the offer to realise the bar for a gallery and we were kind of sick of creating this kind of trash look again.

So, we focused on the essence and created the OTTOBar.

RFP: What led to choosing the Greek national flag as the header of your bar?

We created the OTTOBar for a gallery located in the Otto Street and thought it would be nice to play with the name of the location. Then, we tought about who Otto was and we found out the story about the Bavarian prince who became King of Greece in 1832. Besides important infrastructure, he also brought Bavarian-style beer to Greece. The FIX brewery still exists.

RFP: Should we see in the architectural history that inspired your installation a connection to Europe’s political history?

super + : The more we dive in that history, the more you find out why Europe looks like it is nowadays.

There are so many influences in architecture that have their origins in political contexts.

By means of this bar project, we are able to play with those references.

The OTTObar’s Greek-classicist arcades recall the architecture of “Padiglioni Bavarese”, a forerunner of the German Pavillion, in Giardini della Biennale. This Bavarian Pavillion was initiated by the Munich secession movement and the united workshops for craft art in 1909;  in 1912,  it was furnished with a greek pictorial frieze and rededicated as “Padiglioni della Germania”. In 1937, it was torn down and replaced by the now existing construction.

One thought on “The Biennale OTTOBar RENDEZVOUS IN THE MIRROR SHINE”